Getting close to the end of the season now. Just two more weeks and then I can finally get stuff fixed up, cleaned up, and put to bed until the next season. It’s been yet another busy week, as I try to accomplish as much as I can with the shorter days. There’s still just a bit too much to do each day, and that doesn’t count when something unexpected (see the From the Coop section for an example) happens.

It’s still work, work, work for now. It’s not just field stuff either, as there are many projects that I would really like to get done before the winter is truly upon us. The planning has also already begun for next season, for those who wonder about such things.

As far as growing stuff goes, it’s all but done at this point. With the exception of potatoes, that I need dry weather to dig, and some special order cabbage, I just have a few odds and ends to which I must attend. The low temps that have visited the mountaintop have seen to it that most all the plants are done. 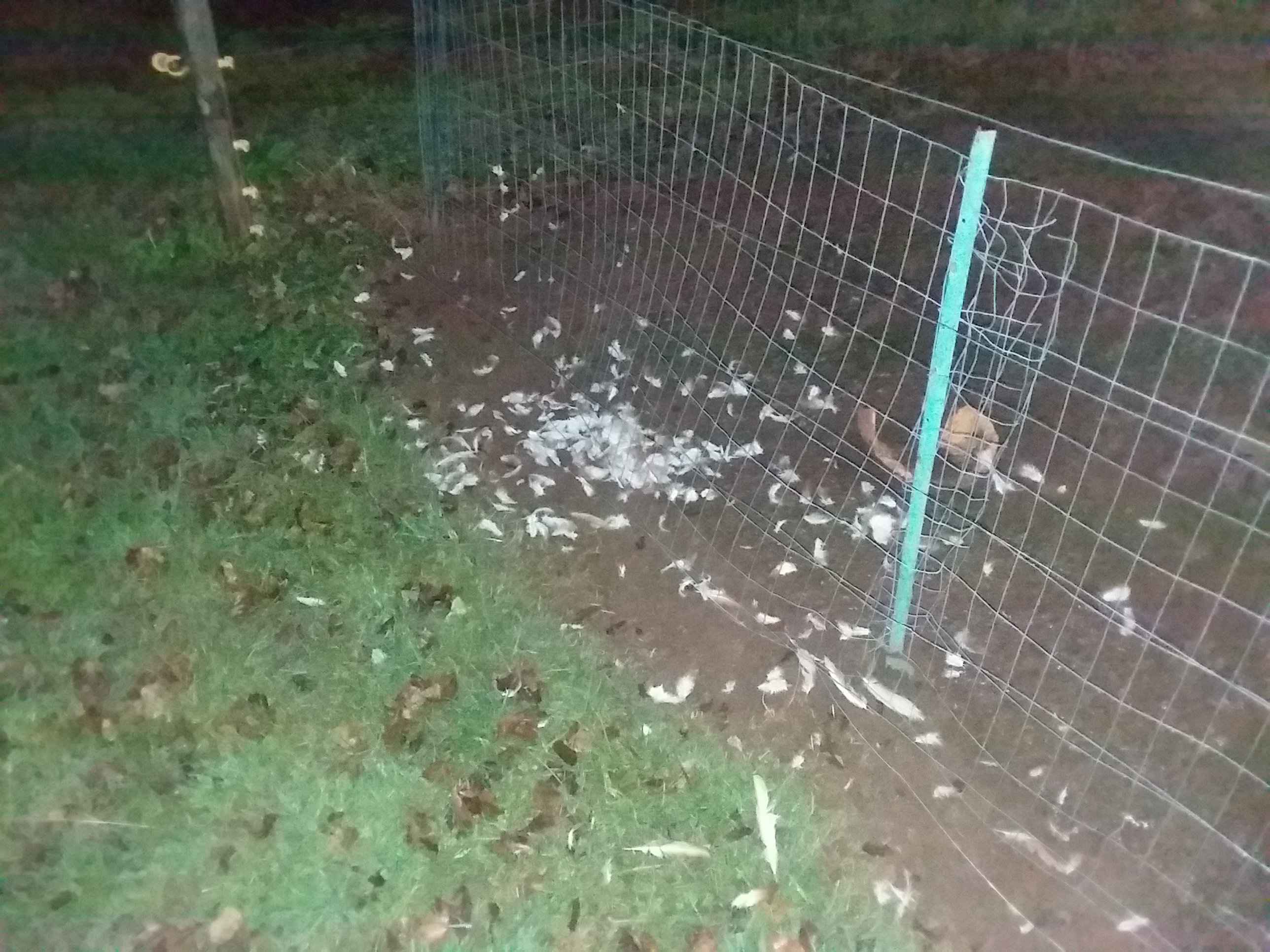 This is the aftermath of an owl attack that occurred on Tuesday evening, just after dark.

I happened to be in the coop, refilling waterers and feeders, when there was a terror-stricken shriek from outside and just around the side of the coop, where I often let the chickens stroll around inside the electric fence, but outside their secure pen. Anyway, in the mere instant of time for me to respond to what I knew was something drastically wrong, I rounded the corner to see the owl trying to drag the chicken under the fence.

Apparently, the owl spotted the chicken and swooped in from the driveway side, not realizing there was not only the electric fence wire, but also welded wire garden fencing between it and the chicken. Despite the owl slamming into both, it still managed to grab the chicken and start to pull it under the fence. The owl obviously didn’t realize I was there, and when I came running around the corner it immediately dropped the chicken and took off.

The chicken was visibly injured and somewhat covered in blood. I scooped it up, figuring it had been seriously, possibly fatally wounded, and brought it into the garage where I normally tend to chicken problems and keep the medical supplies for them, and started cataloging and treating the injuries. Surprisingly, most of the blood was not from the chicken. It appears the owl, not seeing the two layers of fine wire fencing, seriously injured itself in the attack. Aside from the chicken losing a whole bunch of feathers, as you can see from the picture, it suffered some scrapes, deep scratches (not quite true lacerations), two minor talon punctures (one in the right wing and the other centered on the back), and one actual bite that took a small chunk out of its backside (the worst of the injuries).

The chicken is now being kept in the house due to those injuries and the fact that I know if I put it back in with the other chickens that they will peck at her wounds and kill her.

Aside from that bit of excitement the chickens are still generally doing well and adapting quickly to the cold.

Please remember that the last day for this season is Sunday, November 18th, so if you want jam that’s your deadline. If you miss it, please understand I will be very difficult to get hold of after that date, though the best way to try is by text.

That’s it for now. Hope to see you all at the farm soon. Have a great week.

Pick up by appointment only.

Send Us an Email