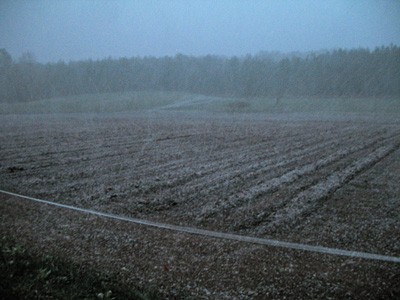 Well, as you can see from the picture, this past week ended quite oddly, though far from unheard of for this time of year.  Yes, what you are seeing is snow that began accumulating around 8pm on Sunday evening.  Coupled with the overall low temps, the early growing conditions are the most challenging I’ve encountered since starting in on this project 7 years ago, and that includes last year’s July 3rd low temp of 39.4ºF and the resultant damage it caused.

However, I was able to get the 1st planting of potatoes in the ground (Red, Russet, and Yukon Gold).  Unfortunately, due to the rains from the previous week I was unable to get carrots, beets, and radish direct seeded.  I’m hopeful, with the call for improving weather that they’ll be put in shortly.

Additionally, more flats have been started (nearing 150 total), but difficulties with several of the tomato varieties have come up, with quite a few plants dying off.  Additional flats have been added to make up the difference, but they will be several weeks behind the others.

Send Us an Email